Facing Up to the Accessibility Problem 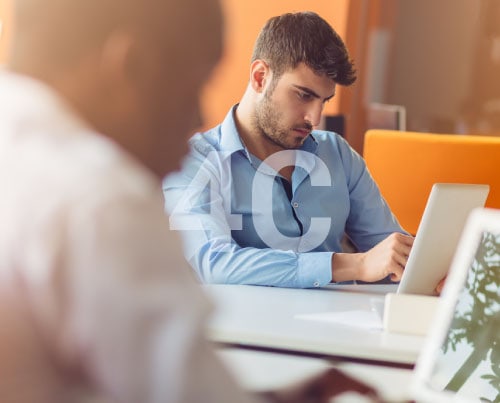 The headline struck me: The Digital Courseware Accessibility Problem.

It was, I expected, a lead-in to a deep, comprehensive review of a super important thing in the marketplace I’m in, with the potential to define a critical issue. Instead, what I found was a brief overview of an issue fraught with challenges on all sides—for providers, faculty, and institutions—offering little comfort on how we could overcome it.

So, I did what any good HigherEd observer (and reformed journalist) should do: I took to Twitter with a hot take.

This story focuses a lot on the companies, and very little on the colleges or professors, who seem to point at the companies. With the rise of OER, when the professors and colleges become the "company" — this is everyone's issue, from now until forever.

(I should note that if you really want to see my other tweets, they alternate between conference twitter and sports twitter, especially screaming hot #GoPackGo takes. Also, my friends making fun of my conference tweets because they claim they don’t understand a darn bit of them. You’ve been warned.)

Given my 17 years as a higher-ed wanderer, the purpose of that tweet was to point out that we’re now in a critical place with the issue of accessibility of content. And there’s a bigger story to tell.

There’s no doubt that accessibility is a critical issue. There’s a giant spotlight on equity and access in higher ed. Just listen to the political conversation. Or open Twitter. Ensuring that students who need it get the baseline content to succeed in their coursework needs to be a major focus. And the issue is playing out even as “Big HigherEd” goes through a significant change in the potential population pool, the student debt question looms, and the large majority of students are first-gen, or juggling full-time work and school at any age and life situation.

It’s an issue we need to focus on in the coming year. Because accessibility is about more than just the technical aspects of delivering content, or lawyerly hair-splitting that what needs to be done is outside the scope of a statute.

We’ve got to open up this conversation to the broader meanings and concepts around accessibility—to deliver a long read with all of the angles.

Reading the Inside Higher Ed story, I was wholly disheartened by the lack of depth of the perspectives I read—and a little sad to realize that the article probably does represent the current state of the accessibility debate.

I wasn’t sure which narrative was worst: the fact that campuses feel this might be a problem because of “academic freedom”? That big publishers with huge install bases somehow claim that this is the first time they’ve thought of “this issue” in the last 20 years of digital learning? Or that they’re focused on an effort to get outsized improvements in these disciplines and platforms with zombie tech, when the business is going through massive upheaval?

Plus, the timing on this focus couldn’t be more perilous.

There’s absolutely no denying the upheaval in publisher land that’s to come in 2020. Mergers. Challenges to mergers. Reductions in staff and resources and deeper cuts. A push toward subscriptions. Disappearing titles. Dilapidated tech platforms.

And their arch-rival (and maybe frenemy)—the Open Educatioal Resources (OER) movement—is strong, but also wrestling through a few things and fraught with its own questions.

Sure, making the first steps toward freely licensed content has been a great thing for the faculty who have wished to exercise their academic freedom to reorganize their learning environment and deliver streamlined (and important) content. But, there’s got to be a reason publishers got started in the first place. There’s all the stuff that publishers do—edits and corrections and updates and delivery and all those pesky PowerPoints in the back that faculty seem to like. And sadly, even the institutions that can afford to do those publisher things aren’t seeing the value. The infrastructure has to come from somewhere. And a big part of that has to be the broader concept of accessibility, not just the dollars saved from not buying textbooks from one particular outlet. Because there’s a Phase II in this story—and the broader concept of accessibility has to be there.

It’s all setting up to be an amazing story, worthy of the kind of music that plays in the background of a mid-afternoon show on those legacy networks. Except that today’s students are more highly leveraged than ever in their quest to fulfill a dream, make a better life, and learn. And “do no harm” is still a critical mantra for those looking to test the new in EdTech on the active student populations roaming their physical or digital campuses.

We’re far beyond the era where just the faculty—or just the publishers—should be concerned about this. And, thankfully, there’s a least a little evidence that space is focused on the issue.

A Tale of Three Conferences

This summer, in my rounds of the three major LMS conferences, there was one booth that seemed to get a ton of love. And that says a lot when no one really goes to these conferences to visit a vendor booth (unless it’s InstructureCon and there’s really good swag).

People flocked to Ally, and they were a hot destination for a number of use cases: Administrators who needed to figure out a way to further entire content infrastructures to compliance. Faculty who individually wanted to ensure their content in the LMS would make the grade. And instructional tech leaders who wanted to be sure to put forth an authoring environment and ecosystem that gives contributors every chance to get it right.

(Shout out to Ally — they’re not a partner, or a sponsor, or really anyone I know. I’m just making an honest observation from three weeks wandering the LMS wilderness. I hope the promise in the tech is all that folks want, and more.)

And maybe my gaze was trained because I was heartened: in my short time here at MindEdge so far, it’s something that’s super top-of-mind.

At MindEdge, the leadership has long held a focus on the standards of accessibility to provide the right level of accommodations for the learners we serve. It’s in our documentation and the underlying spirit (and code) of our tech development. It takes a consistent focus of people and processes to keep accountability high, and we dedicate ourselves to that cause.

All that said, I readily acknowledge that there’s a moving target, and the extra work required to ship a good thing in this new decade. No one entity can get it completely right all the time. As the web transforms, things move quickly. And in the most modern of times, we’re a prisoner—not of an operating system we can choose to delay and defer when our requirements demand it, but of a browser that continually wants to update itself in the background without notice. And taking a careful approach means that some things which are new might move a little more slowly, because everything’s got to be right before it launches.

That’s a lot of caveats. But they’re also real live things that real live people are dedicated to figuring out. And I could go on and on about the challenges this creates (and I might, in future postings)—but for now, it’s critical simply to put forth the need for broadening our thinking about accessibility, and what it means. Because it’s more than a political concept or something to undertake to ward off legal action. And it’s got to be more than something caught in the middle of a sea change in the publishing market.

Now that we’ve all made eye contact with the critical aspects of the issue, there’s the nagging feeling that it’s high time we all did something about it. And there’s no justification not to.